Radiation therapy in cancer treatment uses high doses of radiation to kill cancer cells and helps prevwent them from spreading throughout the body. The use of radiation therapy is one of the primary means that physicians have to help treat patients who have been diagnosed with cancer and is prescribed in 60% of all cancer treatment scenarios. Radiation is typically prescribed and administered through the use of an external beam which is provided by a machine called a linear accelerator. The beam is localized and given in precise measures of energy, or doses, to specific areas on the human body for treatment.

Over radiation occurs when some element of error occurs during the treatment process and the patient gets more then the prescribed dose of radiation over a period of time. While the linear accelerator is a very precise provider of radiation, there is a human component involved in doing the math and physics required to set up the machine to provide accurate treatment dosage. The system sometimes fails when these human failsafes are ignored and the patient receives the wrong amount of radiation.

The results for over radiated patients are devastating. The extra radiation, even in seemingly small doses, weakens and kills healthy tissue causing skin and organ damage, and often death. At Goldberg & Goldberg we have handled over radiation cases which have resulted in record recoveries for our clients including a verdict of $16 million and a settlement of $7.5 million.

The Chicago Sun-Times reported today about Goldberg & Goldberg’s record recovery in a wrongful death case where the deceased had only adult children survivng her. Patricia Quirk, age 60, died in 2004 after her doctors at Little Company Of Mary Hospital negligently over radiated her while treating her for cancer.

The lawsuit accused The Hospital and Quirk’s radiation oncologist of failing to make sure that Ms. Quirk received the proper amount of radiation while receiving treatment for stage 3 endometrial cancer. She ultimately received overradiation on seventeen different occasions of her treatment. Ironically, at the time of her death she was cancer free,

The lawsuit settled for $7.5 million. Mrs. Quirk is survived by her husband and two sons.

Barry D. Goldberg and Peter A. Nicholson of the Chicago law firm of Goldberg & Goldberg have settled a wrongful death case on behalf of the Estate of Patricia Quirk for $7.5 million. Quirk v. Little Company of Mary, et al., 05 L 00379. The case was assigned for trial to the Hon. Thomas Hogan in the Circuit Court of Cook County. Little Company of Mary is represented by Marilee Clausing and Susan Hannigan of Anderson, Rasor & Partners, Radiation Oncology, S.C. is represented by David Burkter of Cunningham, Meyer & Vedrine and the radiation oncologist is represented by Mary Cunningham of Kominiarek, Bresler, Harvick and Gundmundson, all of Chicago.

Beginning on March 26, 2003, Patricia Quirk received an overdose of radiation to her pelvis as she underwent radiation therapy for a stage 3 endometrial cancer. She received 50% more than the prescribed dose of radiation on 17 separate occasions during her radiation therapy. This radiation overdose ultimately perforated her bowel, causing her to become septic and leading to her death on May 8, 2004 at the age of 60. Mrs. Quirk is survived by her husband Thomas Quirk and two adult children. Mrs. Quirk was a life long resident of Chicago who resided in the West Lawn neighborhood. She was a social worker who was considered an expert in the field of community relations and the concurrent politics of mental health care. She was previously honored by four Chicago Mayors, the City Council and the Illinois General Assembly for her work with the mentally disabled citizens of Illinois.

Goldberg & Goldberg is a premier Chicago, Illinois law firm that concentrates its practice in the representation of plaintiffs in medical malpractice lawsuits. In addition to this settlement Goldberg & Goldberg has secured other significant results in over radiation cases, including a $16 million jury verdict in 2005. Barry D. Goldberg, one of the firms senior partners, also has the largest personal injury verdict in the history of the state, a record setting $127 million result. Goldberg said, “we are pleased to be able to deliver some measure of justice to the Quirks who have suffered such a terrible loss of this wonderful person.”

END_OF_DOCUMENT_TOKEN_TO_BE_REPLACED

Gymnastics coach Michael Cardamone, who was accused of fondling 13 of his former gynastics pupils, has settled a lawsuit with them for $1.5 million, the Sun-Times is reporting. The gymnasts brought their lawsuit in 2005 accusing Cardomone and the Aurora gym owned by his family.

Cardamone was sentenced to twenty years in prison by a DuPage County jury in 2005 for fondling seven former students. His conviction was eventually overturned by an appeals court that ordered him to undergo a new trial.

The civil lawsuits was settled by the insurance company that insured the family gym, The American Institute Of Gymnastics, in Aurora, which is owned by Cardamone’s mother, Linda Lynch. Lynch, in a statement said, that she still supports her son and that any settlement over “zero is too much,” The thirteen girls will split up the proceeds of the settlement.

Earlier this week the Illinois Supreme Court announced that it would likely release its decision on medical malpractice reform in the case of Lebron, et al vs. Gottlieb Memorial Hospital, et al today.

Unfortunately, it appears that the court did not release the decision today as anticipated. This is not an uncommon occurence. The Lebron case was argued before the court over one year ago and the supreme’s decision is much anticipated by the trial bar and general public.

The Medical Malpractice Reform Act of 2005 was determined to be unconstitutional by Judge Diane Larsen of the Circuit Court of Cook County. Her ruling determined that caps on damages in medical malpractice cases are not allowed by the state constitution, something that the Illinois Supreme Court has decided on two prior occasions.

To date almost 450 Paxil related suicide lawsuits have been settled by the drug manufacturer. There are an additional 600 claims outstanding claiming that Paxil caused birth defects. In October, a Philadelphia jury found the drug maker responsible for birth defects in a 3 year old boy and ordered a $2.5 million dollar award to the boy and his family.

Hollywood actor James Woods setttled a medical malpractice case brought on behalf of his brother who died while he was a patient in the Emergency Room of Kent Hospital in Kent County, Rhode. The Providence Journal Online Edition is reporting that while the financial terms of the settlement are confidential, the hospital took the unusual step of apologizing to the Woods family for their mistake. 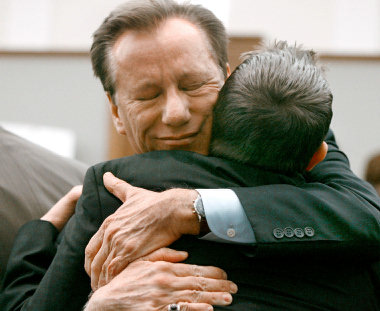 Woods said the impetus for the settlement came with a phone call from hospital president Sandra Coletta. In that call, he said he heard something he’d never heard from Kent Hospital before, someone saying she was sorry for his family’s loss.

It has been widely reported that apologizing for medical mistakes is the number one way a doctor or hospital can help curtail a medical malpractice claim. Often times patients and their families are looking for closure after the loss of a loved one. An apology is often the piece of the grief puzzle that helps wounds heal and allows people to move on after a tragedy.

END_OF_DOCUMENT_TOKEN_TO_BE_REPLACED

A ten-month old Laporte, Indiana girl was injured when she was attacked by a pet monkey at the home of a family member. Apparently the monkey was removed from her cage when she pulled on the back of the infant’s hooded sweatshirt and banged her head into the cage. The girl suffered injuries and was taken to a local hospital for treatment.

Last year a chimp severly injured a Connecticut women prompting outrage from the general public and calls fior enhanced legislation barring people from keeping primates as pets. The U.S. House of Representatives went to far as to pass The Captive Primate Safety Act in the hopes of banning monkeys as pets. The measure has stalled in the Senate. Unfortunately, there is no permit required in Indiana to own a pet monkey.

An Amtrak train travelling from Chicago to Seattle struck and killed a man in Deerfield, Illinois on Sunday. Amtrak has identified the man as a “trespasser” walking along the tracks near Dundee Rd. in the north suburban town when the Amtrak Empire Builder struck and killed him at around 3 p.m.

Officials are reporting that the man is in his 20s, his identity has not yet been disclosed. Railroads are particularly agressive in blaming the victims of accidents for their own injuries and deaths in the immediate wake of a tragedy involving a train collision. Often times, after investigating an accident, we learn that the railroad is to blame for an accident that they initially blamed on the person who was injured or killed.

Joanne Doroshow wrote an excellent article in the Monday, November 9, 2009 edition of The Huffington Post called Medical Malpractice Tort Reform – We Are Already Suffering And Don’t Need More. She points out that unless you are currently living under a rock you have heard the term “tort reform” but, sadly, probably don’t know what it really means.

In Illinois we have tort reform as it relates to medical malpractice. Starting in 1985, and every ten years thereafter, the state legislature has based some sort of restriction on the publics right to sue for personal injury. In the late 1990s the Illinois Supreme Court struck down these restrictions, overruling the legislature, and finding them to be unconstitutional. The legislature, bowing to pressure from the insurance industry, tried again in 2005 and passed limits on jury awards as they relate to doctors and hospitals only. That legislation is currently being reviewed for constitutionality by the Supreme Court and we expect a ruling on the issue in the near future.

The term tort reform implies that its results would be beneficial to everyone. Sadly, this is not the case. Tort reform in Illinois will only make it harder for average hard working men and women to seek redress for the harms caused to them as victims of negligence. The tort reform movement was started by and is funded by insurance companies. The same companies that have the most to gain financially by limiting jury awards.